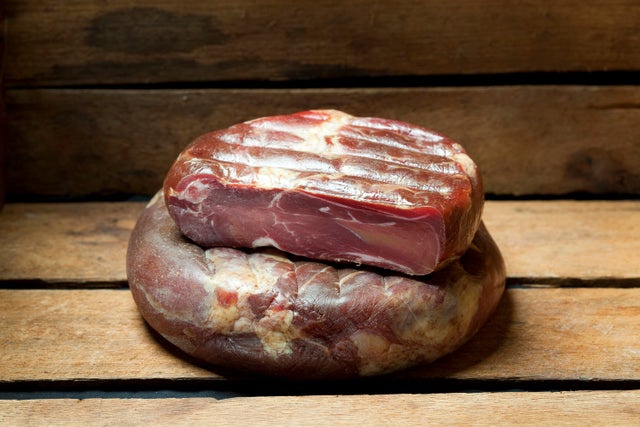 Ivo Borgo, the founder of Borgo salumi, immigrated to Australia in the early 1950s from the small town of Arsiero in Veneto, Italy. Bringing with him the Northern Italian salumi making techniques passed on to him by his father.

Borgo is one of Australia’s oldest Italian-style salumi producers. The third generation family owned business established in 1966 produces authentic Italian delicacies. Focusing on time-honoured traditions and old artisan methods, Borgo‘s mantra reflects the Northern Italian tradition of simplicity. The emphasis is on enhancing and amplifying the quality of the pork, not masking the flavour of the raw ingredients with heavy seasoning.

Borgo Proscuitto is selected from only from the best hind legs of pork, which are deboned, salted and seasoned according to a traditional Italian recipe. The legs are salted, then air-dried and matured for a minimum of 8 months.

Proscuitto should be sliced very thin so that it is slightly transparent. Often served as an antipasto, wrapped around grissini or accompanied with rockmelon. It is equally delicious in a crusty bread roll or tossed through a salad or summer pasta